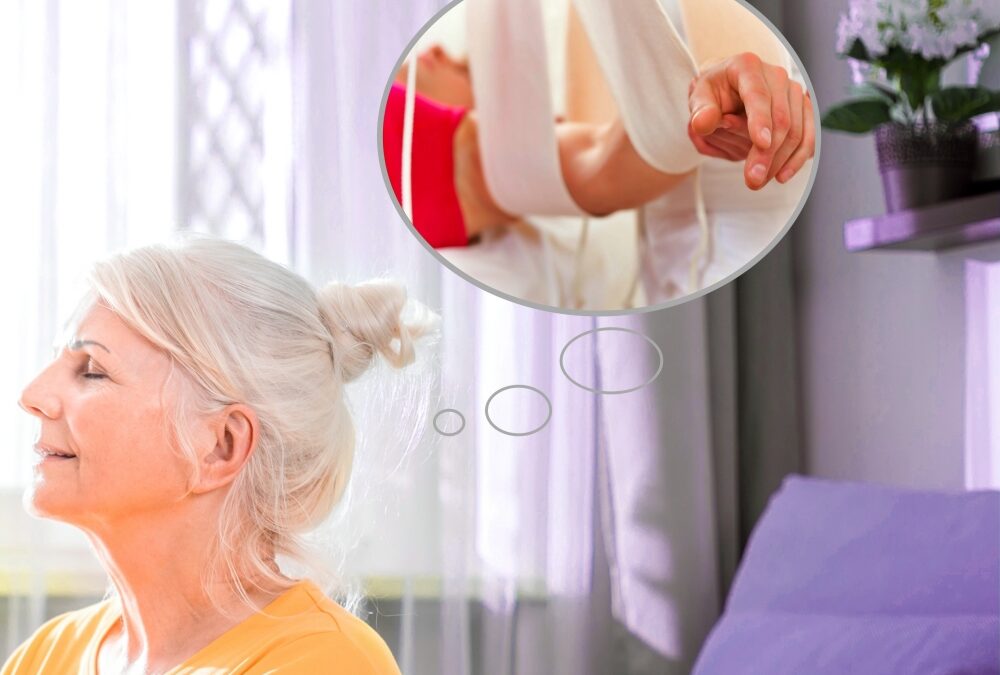 Mental practice is a way of relearning movement (motor functions) by creating an image in your mind of the body performing that movement without the body actually moving. This method of enhancing performance and/or improving a motor skill has been used for decades in areas of study such as sport psychology, and cognitive therapies.  In recent years there has been a growing body of knowledge regarding mental practice and its use in stroke and brain injury recovery.

How do you restore motor function after a stroke or brain injury?

Usually, this will require a physical and occupational therapist who will implement movement retraining strategies with the goal of getting the brain to “rewire” or build new connections in the area of the brain that control movement.  However, this type of training often requires equipment and, of course, one on one time with a therapist.

And this is where mental practice can be such a valuable tool in your bag of tricks to assist in restoring motor function.

I looked at several meta-analyses (groups of research studying the same thing) from 2006- 2013.  These meta-analyses concluded that mental practice might have positive effects on performance in patients who have neurologic diagnoses, however, further research needed to be done.  Now, that being said, I believe that there is some value in this form of training for the reasons mentioned above. But, I would not be serving you to the best of my ability if I did not share the actually scientific facts regarding a treatment. 🙂

And because I believe it has some value, here are my recommendations on how to incorporate mental practice into your stroke rehabilitation program

Ok, let’s start by calling out the elephant in the room.  Performing a motor skill is not the same thing as actually performing the skill.  And of course, you are correct. If this were the case, I am shutting down my gym membership and investing that time sitting at home and “visualizing” myself running on the treadmill. End of discussion. But wait, that is not exactly what mental practice is nor am I suggesting that you can replace actually motor training with mental practice.  So, how exactly does mental practice have an impact on learning a motor skill?

You can read more about this in this paper

How do you use mental practice to improve motor function?

There is a strong likelihood that you already use some form of mental practice or that you have in the past. Most of the time it is happening right before we attempt any movement that is not “automatic”. For example, attempting to step over a huge tree trunk if a tree has fallen in your path. (don’t ask me how or why that was the first thing to come into my mind ??‍♀️) But, hopefully you have an example in your head of something similar. This required you to stop, think, and visualize yourself stepping over the tree so that you could plan how you would perform this movement. So, long story short, you know how to do it. 🙂 Now, let’s get a more consistent method in place so that you can use this same technique in a more strategic way.

Start by setting aside 10 min on days that you do not go to therapy to dedicate to this practice. You will want to dedicate a location in your home that is quiet and has no stimulation. For example, no TV, no phone, no computer, no tablet, and if possible, no other humans ?

Next, you will want to relax your body and your mind to a “resting state”. I recommend using an app like Calm, or breethe.

Now, this will require some work, but try and take yourself back to your last therapy session and visualize the skill you were performing with your therapist. think about how it felt to move the arm or the leg.  Think about the therapist’s touch. Was he or she holding your body still while you moved your arm? Were both of her hands on your arm guiding the movement? Think about what she was saying, was she telling you to relax a certain part of your body? Try and do that now. Or, was she giving “stronger” commands to initiate a certain muscle? How did it feel when the arm actually moved? Was there some resistance or did it feel like it moved freely? Keep going and keep visualizing yourself doing this until you hear the time go off.

Give it a try and let me know what you think.